Those who have had the fortune of being born on some particular spot, consider themselves better, nobler, grander, more intelligent than the living beings inhabiting any other spot. It is, therefore, the duty of everyone living on that chosen spot to fight, kill, and die in the attempt to impose his superiority upon all the others. The inhabitants of the other spots reason in like manner, of course, with the result that, from early infancy, the mind of the child is poisoned with bloodcurdling stories about the Germans, the French, the Italians, Russians, etc.

When the child has reached manhood, he is thoroughly saturated with the belief that he is chosen by the Lord himself to defend his country against the attack or invasion of any foreigner. It is for that purpose that we are clamoring for a greater army and navy, more battleships and ammunition. It is for that purpose that America has within a short time spent four hundred million dollars. Just think of it - four hundred million dollars taken from the produce of the people.

For surely it is not the rich who contribute to patriotism. They are cosmopolitans, perfectly at home in every land. We in America know well the truth of this. And do they not squander with cosmopolitan grace fortunes coined by American factory children and cotton slaves? Yes, theirs is the patriotism that will make it possible to send messages of condolence to a despot like the Russian Tsar, when any mishap befalls him, as President Roosevelt did in the name of his people, when Sergius was punished by the Russian revolutionists.

But, then, patriotism is not for those who represent wealth and power. It is good enough for the people. Let us take our own Spanish-American war, supposedly a great and patriotic event in the history of the United States. How our hearts burned with indignation against the atrocious Spaniards! True, our indignation did not flare up spontaneously. It was nurtured by months of newspaper agitation, and long after Butcher Weyler had killed off many noble Cubans and outraged many Cuban women. Still, in justice to the American Nation be it said, it did grow indignant and was willing to fight, and that it fought bravely.

But when the smoke was over, the dead buried, and the cost of the war came back to the people in an increase in the price of commodities and rent - that is, when we sobered up from our patriotic spree it suddenly dawned on us that the cause of the Spanish-American war was the consideration of the price of sugar; or, to be more explicit, that the lives, blood, and money of the American people were used to protect the interests of American capitalists, which were threatened by the Spanish government.

That this is not an exaggeration, but is based on absolute facts and figures, is best proven by the attitude of the American government to Cuban labor. Nor do we stand alone in waging war for such causes. The curtain is beginning to be lifted on the motives of the terrible Russo-Japanese war, which cost so much blood and tears. And we see again that back of the fierce Moloch of war stands the still fiercer god of Commercialism. Kuropatkin, the Russian Minister of War during the Russo-Japanese struggle, has revealed the true secret behind the latter. The Tsar and his Grand Dukes, having invested money in Corean concessions, the war was forced for the sole purpose of speedily accumulating large fortunes.

The contention that a standing army and navy is the best security of peace is about as logical as the claim that the most peaceful citizen is he who goes about heavily armed. The experience of every-day life fully proves that the armed individual is invariably anxious to try his strength. The same is historically true of governments. Really peaceful countries do not waste life and energy in war preparations, With the result that peace is maintained.

However, the clamor for an increased army and navy is not due to any foreign danger. It is owing to the dread of the growing discontent of the masses and of the international spirit among the workers. 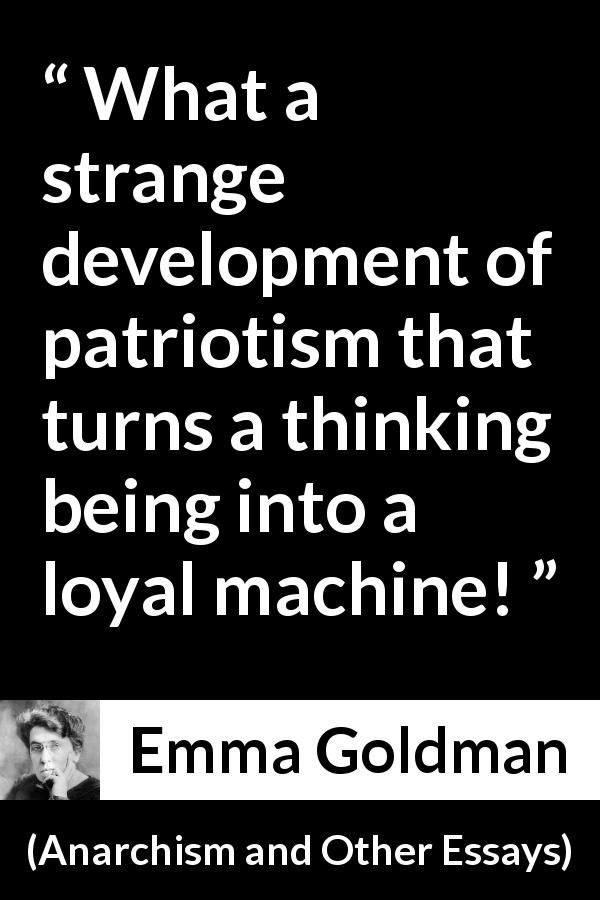 It is to meet the internal enemy that the Powers of various countries are preparing themselves; an enemy, who, once awakened to consciousness, will prove more dangerous than any foreign invader. The powers that have for centuries been engaged in enslaving the masses have made a thorough study of their psychology. They know that the people at large are like children whose despair, sorrow, and tears can be turned into joy with a little toy.

And the more gorgeously the toy is dressed, the louder the colors, the more it will appeal to the million-headed child. To make them more attractive and acceptable, hundreds and thousands of dollars are being spent for the display of these toys. That was the purpose of the American government in equipping a fleet and sending it along the Pacific coast, that every American citizen should be made to feel the pride and glory of the United States.

Take it with you. Guides you to smart, interesting podcasts based on category, channel, or even specific topics. Looking for a high-quality podcasts app on Android? Player FM might just be it. Brilliantly useful, fantastically intuitive, beautiful UI.

Developers constantly update and improve. Easy and intuitive to use. New features frequently added. Just what you need.

Not what you don't. George H. Doran Co. Andrew Mack. The Idea of a League of Nations.

enter Henry Cabot Lodge. Guerrilla Speech Tactics. David M. War: Its Nature, Cause and Cure. Lowes Dickinson. The Problem of Foreign Policy. Gilbert Murray. Jean Bloch. The Address of the Confederation to the People of Canada. Louis-Joseph Papineau. In Our First Year of the War. The League on Trial Routledge Revivals. Max Beer. The Common Sense of War and Peace. Lala Lajpat Rai. General History of Immigration in America. Allan Mclaughlin. Scientific War.

Lenny Flank. Getting Together. Ian Hay. The Psychology of War.